"This site uses cookies from Google to deliver its services and analyze traffic. Your IP address and user-agent are shared with Google along with performance and security metrics to ensure quality of service, generate usage statistics, and to detect and address abuse."

The counseling firm, Hvert 3. barn, owned and run by law student, engineer and angry father Christian Thorsen Noergaard, as well as jurist Tanja Graabaek, is founded on the notion of Modern Child Psychology.

This concept rests on the following three pillars: 1. exposure to violence is preferable to avoiding visitation, 2. Don't look back –– every parent deserves a second chance, and 3. A child needs two parents.

First and foremost this understanding of child psychology builds on the belief that it is vital for the child, not only to know but to have regular contact with both parents. This is true, it is alleged, even if one of the parents is violent and harmful to the child. Modern Child Psychology, as it is practised in Denmark, cautions parents against using “the adult perspective” when dealing with custody cases in which violence and abuse are factors.

Here, on the the Facebook pages of Foreningen Far, Christian Noergaard expounds the philosophy: 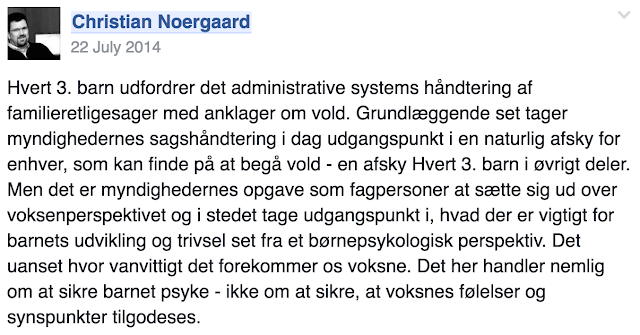 Noergaard explains the task of the authorities as being one of rising above adult perspective. Adults will instinctively protect a child from violence and abuse. But this is misunderstood, we learn. Instead, authorities should concentrate on securing the development and welfare of the child by adopting the child's perspective, which allegedly is one that embraces the violent and abusive parent.

If you think this sounds like utter nonsense, you are right. Translated to plain speak it means that it is better to spend time with a harmful parent, whatever the harm consists of, than to cut off contact. Adults are, according to this prevailing philosophy, asked to suspend their disgust with violence for the benefit of the child.

Needless to say, this philosophy has no scientific basis in the clinical literature.

Modern Child Psychology is practiced all over Denmark –– by the psychologists working for the State Administration, who are entrusted to secure children’s welfare, as well as by Hvert 3. barn.

Not surprisingly, when operating in accordance with this belief, the counseling firm of Hvert 3. barn actively solicits clients in prisons as evidenced by their advertisements and free folders in Fangenetværket [network for prisoners): 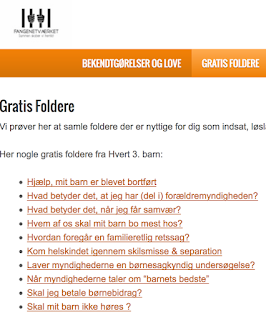 Likewise, the father in a widely media-covered case, a violent alcoholic whose ex-wife begged the authorities to help protect their daughter from him, but who nevertheless succeeded in murdering his 8-year-old daughter, sought counseling with Hvert 3. barn.

This is not disputed by Tanja Graabaek, who writes on her blog:

“ ... the father in question had briefly contacted Hvert 3. barn, but decided against for financial reasons ...”.

It goes without saying that Hvert 3. barn was pleased when the Appeals Board made a decision in principle that condemned a small child to a life in conflict. The clinical litterature has repeatedly shown that conflict is extremely damaging to a child.

Here, two certified child psychologists with a mandate from the State Administration recommend that a child begins treatment to improve his relationship to a father of whom he is mortally afraid. It says verbatim: “This evaluation is valid even if it has overlooked that the father after all does have hidden sadistic and pedophile streaks and a penchant for living this out with his own child.”

A second pillar of Modern Child Psychology is the dictate about never looking back. The State Administration also swears by this belief and a passage quoted by senior researcher with VIVE, the National Institute for Welfare, Mai Heide Ottosen, shows this all too clearly with a hands-on example:

The State Administration has decided on a visitation whereby the father can visit his former wife’s abode to tuck in the child twice a week. This arrangement frightens the mother as her ex-husband has four suspended sentences for violence and sexual assault, including one which dates back to when she was 9 months pregnant and was raped and battered. But in the State Administration the dictum is: “Here we only talk in the present tense.” What the father, in other words, did in the past is no longer relevant. The mother doesn’t understand the necessity of the child having to form relations with the father seeing as he is looking at a prison sentence of two years' duration.


Self-evidently, it is extremely difficult if not impossible for mothers in Denmark to protect their children under the rule of Modern Child Psychology, which is protected both by State Administration, local authorities, the courts and the psychologists association as a tool, which promotes gender equality.

Postscipt: Since the publication of this blog post, the Danish government has made a radical departure from this thinking. This is evidenced by a new family system focusing on keeping children out of harms way rather than on the previous twisted ideology of gender equality at all costs.

Also, a recent bill, which enjoys wide backing from all sides of parliament, will bar people with convictions for murder, attempted murder and aggravated assault from child custody. The (conservative) Minister for Children and Social Affairs, Mai Mercado, speficies that the breakthrough thinking behind this is to prioritise the interest of the child over the right of the parent.

Recently, in December of 2018, Hvert 3. barn folded; Christian Noergaard sold the company last year and left. From 2013 to 2017 he was pursuing a law degree, which never materialized.